One of Toronto’s best kept secrets is the Outer Harbour, the bays of Leslie Spit, and in the canals of the Toronto Islands. If interested, I’d be happy to help you experience canoeing or dinghy sailing from the Cherry Beach area. Taking friends, and friends of, out on the water for a short excursion is a favourite pastime. As the season changes there is plenty online to learn more.

As the Communications Director for the Outer Harbour Sailing Federation of nine clubs and a youth camp I help promote water recreation and help get the word about getting out on the water from the Cherry Beach area. Below are some of my photos from several accounts I manage.

I was fortunate enough to have been introduced to canoeing and sailing from my father when I was a child. Somehow I managed to borrow his boats and bring them to Toronto. I’ve been sailing a Laser with The Water Rat sailing club for a few years and many more with the Outer Harbour Centreboard Club. I’m rarely in a motor boat but I also have the Canada Boating License Pleasure Craft Operator Card. I’ve been learning about the areas natural, industrial and recreational history, its people, ecology, wildlife and the largest urban redevelopment project currently underway in North America.

Laser sailors and race director in the #outerharbourtoronto

The Beaches used to extend all the way to Gibraltarâ€™s Point at the other tip of today Toronto Islands before a storm, helped by a sand quarry, transformed Toronto Bay (where Bay St got its name) into a harbour behind an island. Dredging made it deeper and wider for large ships to pass

White pines off a secluded canal seemingly far from the crowds

Will reach shore sooner or later

Kids playing on the beach

Toronto is turning 185 this year. There’s a festival this weekend at Nathan Phillips Square: celebratetoronto.ca. I looked up some info for a related interest and found it wasn’t easy to find a detailed story of the First Nations and early European settlers. Historical stories have always fascinated me. Perhaps I’m still connecting with a city I didn’t grow up in and the waterfront I enjoy. Like many, I’m trying to learn about who was here before us and honour the past in good faith.

For at least 8,000 years the Great Lake, local rivers and land where I reside have been the homes and passageways for many indigenous peoples including in the 2nd millennium the Huron-Wendat and Petun First Nations, the Seneca, and most recently, the Mississaugas of the Credit River. Today, after more than a century of newcomers from around the world, Toronto is still the home for many indigenous people and I’m grateful to have the opportunity to enjoy these lands and waterways.

When the Europeans first traded from this area they didn’t write about Toronto’s largest river (today’s Humber River) in the Anishinaabe name “Cobechenonk” or use other local words for geographical features. They casually borrowed a word from a different indigenous group for a very specific and ancient sacred place nowhere near the Cobechenonk River. That sacred place was in the middle of today’s Ontario by Orillia. Over a short period the French used variations of the Mohawk word tkaranto for at least three different places that all connected to that small but significant location.

Jump to 2 minutes in to hear where Toronto came from.

Archaeological records of the fishing weir go back to 3,300 BCE in the Archaic Period in North America. The world was still in the Stone Age except for Mesopotamia. Stonehenge had began to be built. The remains of wooden stakes were found in v-shapes to gather and capture fish. They would have provided a bountiful supply of fish at various times of the year, particularly during the spring run with walleye, pike, sucker, and sturgeon according to the City’s “Origin of the name of Toronto“.

Light years later, in the 17th century, three different native languages and the French have words all describing wooden sticks in water used for hunting at this location. This spot was significant. For perhaps 5,000 years this technical and cultural tradition was passed on by word of mouth from generation to generation. 300 years after colonization it looks like it was almost forgotten and buried. A small sign about the most recent band’s relationship with the spot is overshadowed by a highway that possibly passes through the spot sided by marinas. The 4th largest city in North America is named after the place. Yet do many people know this?

The ancient weirs must have been important and bountiful. Having seen the image of trees or poles in water used in four different tongues — Huron, Mohawk, Ahnishnabe, and French — what was this set of poles or trees that formed a fence, barrier, or enclosure? It was a fish weir that crossed the Narrows. It consisted of a system of poles and nets. Fish could swim past the poles but would get caught in the nets. We know from the archaeology of the area and from the early writings of Samuel de Champlain that there were fish weirs in the Narrows that would have provided a bountiful supply of fish at various times of the year, particularly during the spring run of walleye, pike, sucker, and sturgeon.

Further reading: THE SECRETS OF THE MNJIKANING FISH WEIRS from Anishianbek News

At the time of the first European contact in the 17th century the lake was called Ouentironk by the Wyandot (Huron) people. Possible meanings could have been “poles spaced over a distance” or “poles that cross”. By 1666, members of the Iroquois Confederacy moved in and renamed the lake as some version of “Taronto” between 1670 and 1710. The root “-ront” refers to trees. The original word might have been “Tkaranto” meaning “where there are trees in water.” By the end of the 17th Century the Ahnishnabe moved in.

The French called the route to it as the Passage de Toronto (today’s Humber River). Their second fort adopted the name as well in 1749. In 1759 Fort RouillÃ© (previously Fort Toronto) was destroyed by retreating French and New France ended in 1763. The words le passage de Toronto only persisted on a couple of maps and likely hardly in use.

No attempt was made to re-establish a European settlement in the vicinity until more than thirty years. In 1793, Governor John Simcoe, an aristocrat and war hero, lived here for 3 years with a hundred soldiers and others and drew up the foundations of York. York was to be near the Necheng Qua Kekong or Wonscotanach River. The river reminded him and his wife Elizabeth of the River Don in Yorkshire. It was four miles east of the former French stockade on the Cobechenonk (today’s Humber River).

The painting below shows Toronto Bay and was done by Elizabeth Simcoe the same summer they arrived, in 1793. The view is towards the Western Gap, then the only entry to the bay, today’s Toronto Harbour. This beautiful spot is where The Don meets Cherry Street and today is an industrialized zone being massivelyÂ  redeveloped by Waterfront Toronto.

â€œThis evening we went to see a creek which is to be called the river Don. It falls into the Bay near the Peninsula. After we entered, we rowed some distance among the low lands covered with rushes, abounding with wild ducks and swamp birds with red wings.â€ â€“ Elizabeth Simcoeâ€™s diary, August 11, 1793

That same year Governor Simcoe established the location as the capital of Upper Canada and named it York after the town in Yorkshire.

Years later, in 1804, the townsfolk unsuccessfully petitioned to have the name change to what the French had brought down south: Toronto. The English already had a York back home although not as muddy. The word Toronto was likely just as confusing to any visiting Mohawk as they too had a Tkaronto back home.

The times were dangerous and unstable. The American Revolution had been lost by Britain and attacks were expected. The French Revolution just happened and with it another war. 20 years after Simcoe’s arrival Americans burned the Town of York down in the War of 1812.

In 1834, 41 years later after Simcoe’s painting in 1793, the town of York was incorporated and renamed Toronto. The earlier petition worked. So here we are 185 years later as Toronto. We could have been called the City of York, Cobechenonk, or Necheng Qua Kekong. According to my arm chair research we can thank the Mohawk, a few French traders and map makers, and petitioning townspeople for the distinct name. 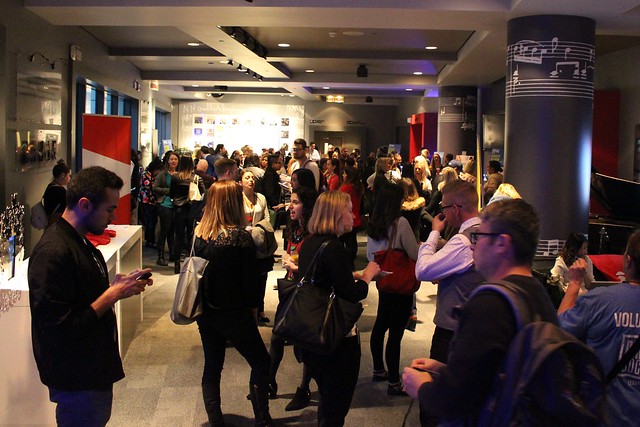 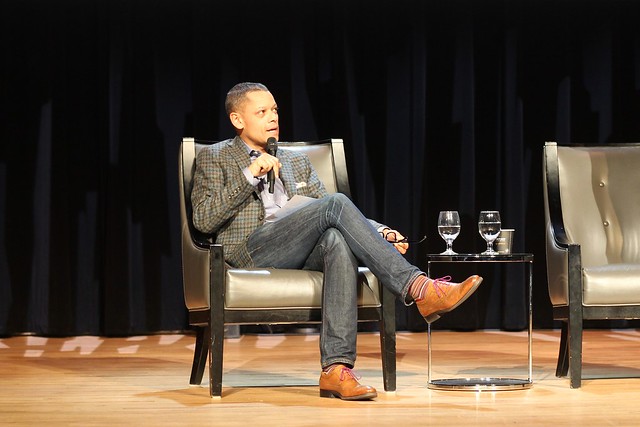 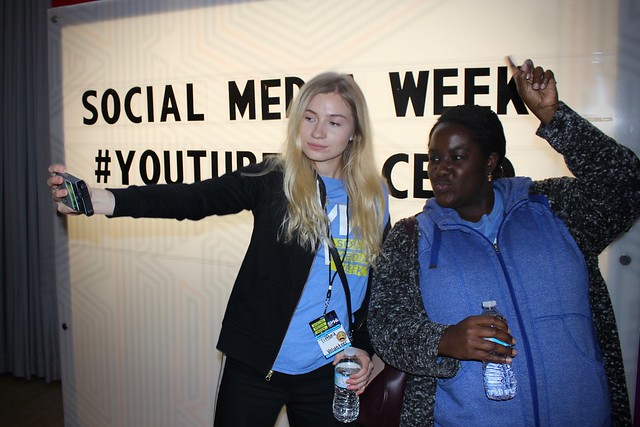 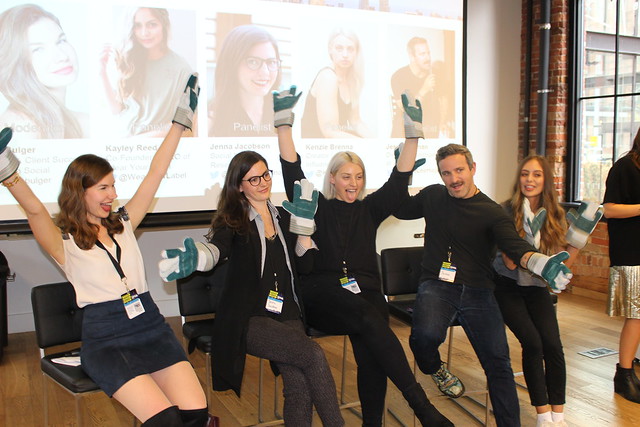 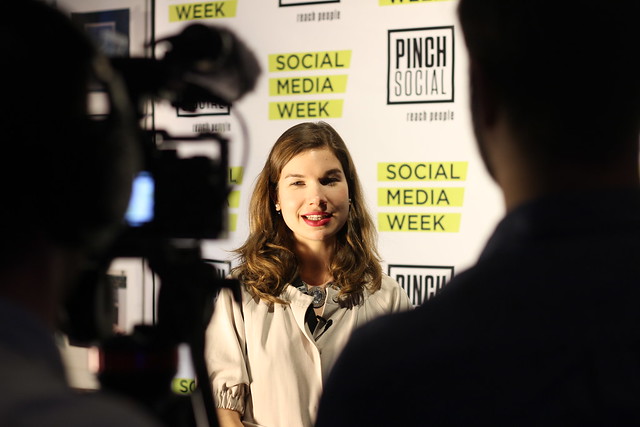 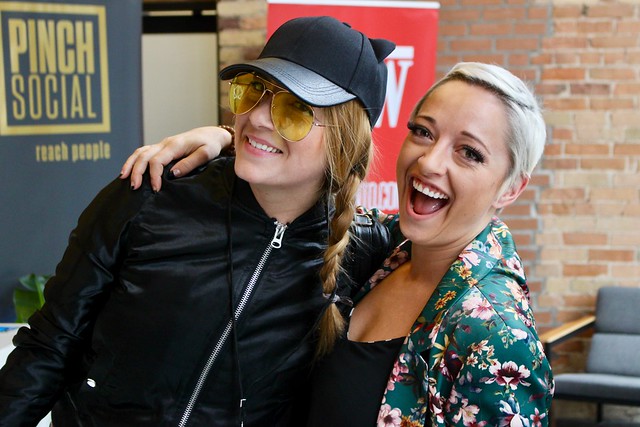 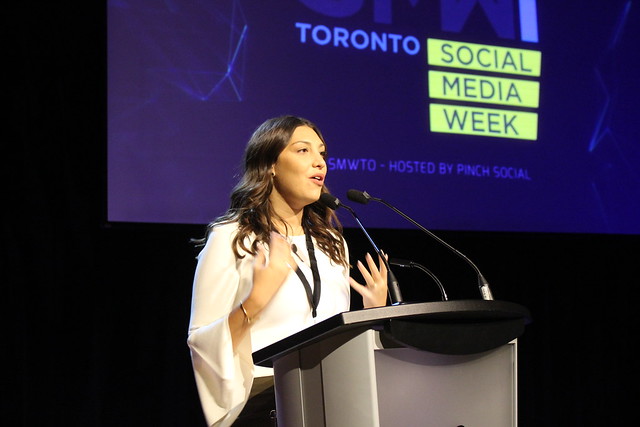 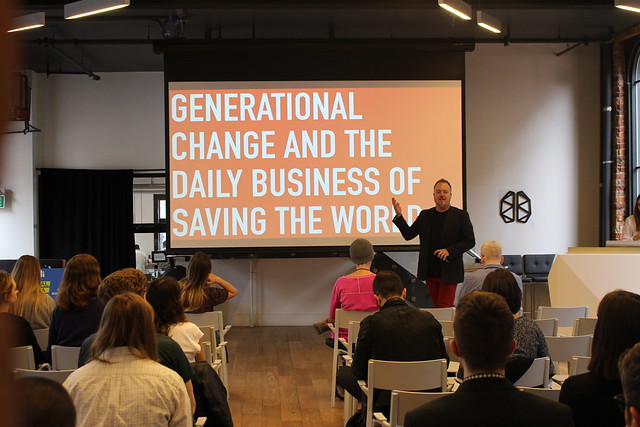 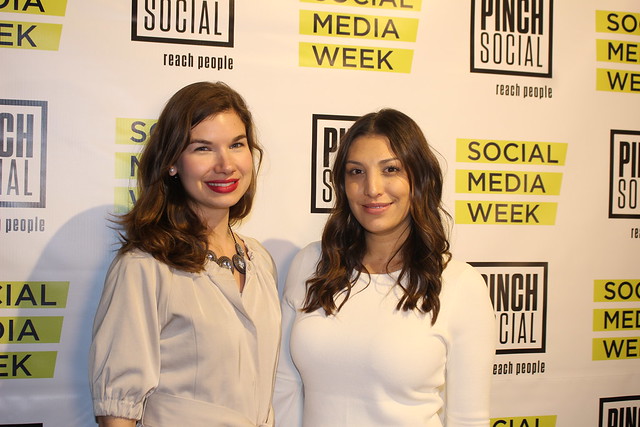 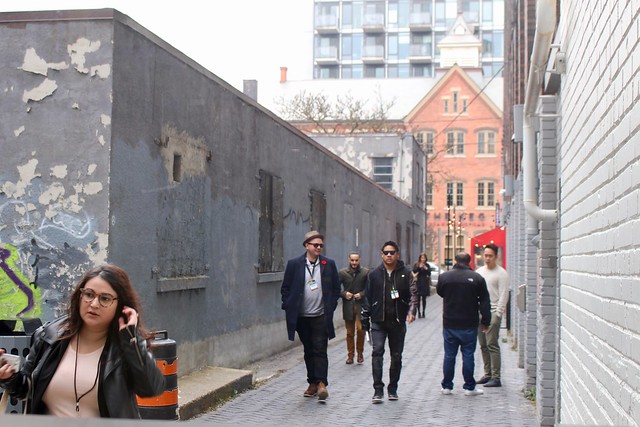 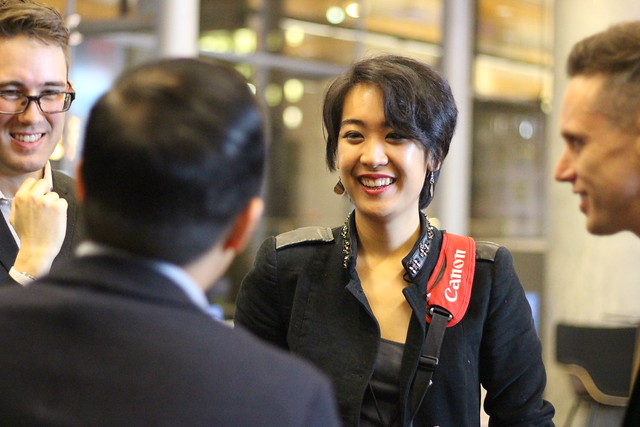 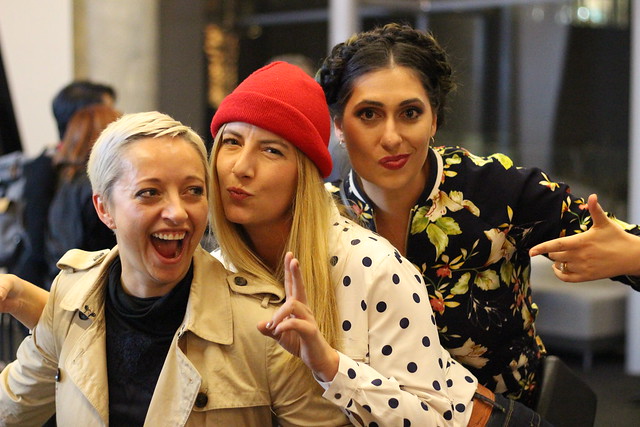 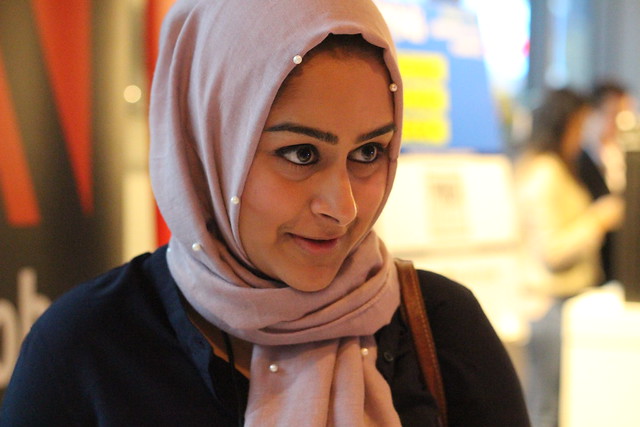 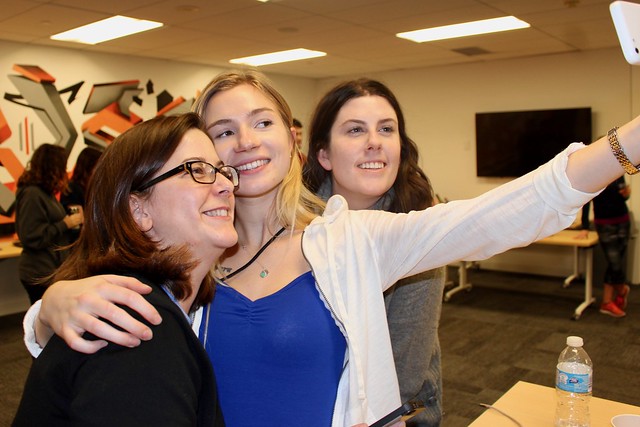 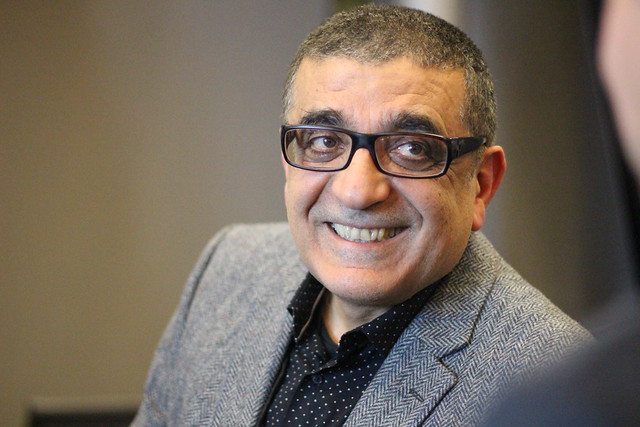 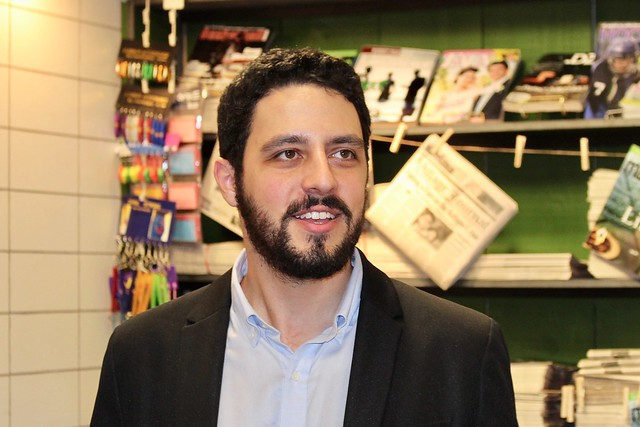 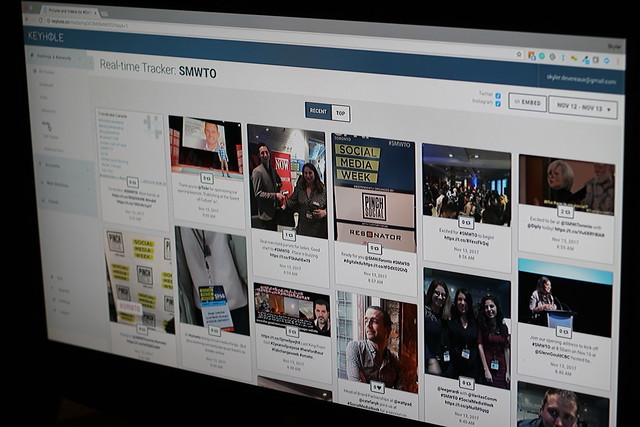 Social Media Week happens in cities around the world. Each conference curates and shares the best ideas, innovations and insights into how social media and technology are changing business, society and culture.